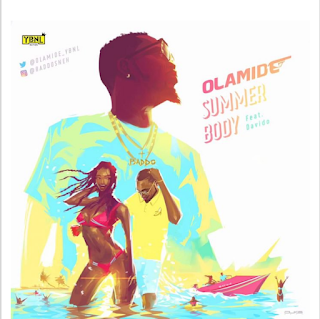 At this point its no longer news that Olamide is up to something bigger, after raising the curiosity of his fans few days back with various photos of him recording in the studio with Davido in far away Miami US and 2 days later they were both seen on set shooting video for the same track.

However it took us a while to find out what the title of the song was, until after we saw the album art which revealed the title as ‘Summer Body‘ what a dope title if you ask me….

Now back to all Olamide fans in the house going by previously released singles by Olamide “Love No Go Die” and “Wavy Level” now “Summer Body” with OBO the Baddest Davido which will be dropping in few days, the song was recorded and video shot in Miami Us.

It may however interest you to quickly recall that the last time this duo jumped on a track together on the track MONEY it was a mega hit, so that may also just be enough to tell set the record straight that Summer Body will also be another Banger that will take over the streets in the coming weeks until then lets keep our fingers crossed !

Now we would like to know What your expectations is about this new joint SUMMER BODY from Olamide featuring Davido;

Would SUMMER BODY By Olamaide featuring Davido Be;

Drop Your Views Below!!!